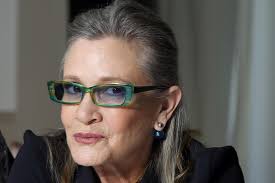 I’m not a big Star Wars fan but I do have quite a few Yoda quotes pinned to my fridge. I first saw Carrie Fisher live in her one woman show Wishful Drinking at the Hartford Stage. I was well into my journey with bipolar disorder and thrilled to see someone so vocal about her own struggle. When Fisher spoke out about her own struggles she gave permission for someone to seek help for their own mental health problems. Her story said that she had no shame about being sick and then getting well. Wishful Drinking was humorous as well as a powerful educational tool for people to see they are not alone. I just finished binge watching Lady Dynamite with Maria Bamford. Bamford also bipolar uses her tv series in much the same way to educate people about what mental illness is and take back some of the stereotypes with laughter as well. I owe a great deal of thanks to celebrities willing to be vocal about their struggles whatever they are. I know Fisher was featured on the cover of BP Magazine. She spoke about it on 60 Minutes as well. While we all can’t advocate in these ways, we bloggers, writers, and laypeople can use our time and talents to create content that engages people about mental health. Blogs, letters to the editor, lobbying legislatures, speaking out in NAMI and DBSA‘s speaker’s bureaus are all good ways to get the message out. Fisher did her part. Now, it’s time to carry on the good fight.