Photo pictures: Founder and executive director of This is My Brave Jennifer Marshall on right with her coworker Lauren 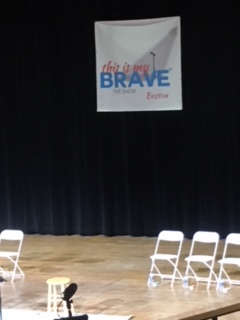 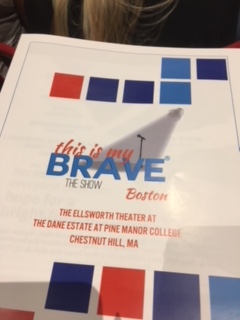 Last night, I attended a magical show. Magic, because people combatted societal stigma to open up about struggles many of us consider taboo. Brave people. Human.

I attended the This is My Brave show in Boston on the campus of Pine Manor College in Chestnut Hills, MA. I met Jennifer Marshall, the executive director of the organization. This endeavor began first with Jenn’s bravery in writing her blog bipolarmomlife located now at http://jennifermarshall.me. This is My Brave is a non-profit organization which provides a community and platform for people living with mental illness to speak out and end the stigma associated with these disorders. Through storytelling, community programs and social media, they hope to change the conversation on mental illness. Since 2014, they have performed 42 shows in the United States and even one in Austrailia. Each show has a regional cast and crew as they are performed in different areas of the country.

The show opened with two young women singing with a guitar a rendition of Sara Bareilles and Jack Antonoff’s Brave. Through personal essays performed like TED talks, poetry, music and dance, each cast member portrayed a different aspect of their struggle with mental illness. Kasey Elliot Maher talked about using mental illness as a superpower by letting go of the notion that the illness controls her. Nneka Hall spoke poignantly about her still born daughter and coming to terms with it. Melissa Brown compared her mental illness ,OCD, to painting a masterpiece. Sandi Hammond spoke about getting diagnosed bipolar in later life. Jason Wright told us how writing poetry was important in his recovery from schizoaffective disorder. Hana Kahn concluded with a song about her wellness. Other cast members included: Christie Pearl, Zach Orlov, Suzanne Garverich, Robin Owens, Sarah Benesi, Aubrey and Evan Grubb, Jamie Davenport and Marty Levin.

Through the use of the personal story, each cast member shared a different aspect of mental illness or living with stigma.

I urge you to follow This is My Brave on Facebook, Twitter, Instagram and YouTube and on their web site www.thisismybrave.org. You can find a video of the Boston 2018 show on YouTube as well as many other shows in other areas. On the web site is a shop for buying Brave Gear t-shirts and other great items to support This is My Brave’s mission. Please consider becoming a Brave Champion with a $10 a month donation to help a worthy cause. Other donations are appreciated too and will help more shows get produced.